CLPHA supports the nation’s largest and most innovative housing authorities by advocating for the resources and policies they need to solve local housing challenges and create communities of opportunity. We frequently champion our members' issues, needs, and successes on the Hill, at HUD, and in the media. In these arenas CLPHA also advocates for legislation and policies that help our members, and the public and affordable housing industry as a whole, strengthen neighborhoods and improve lives.

Click below for links to congressional testimonies, statements for the record, action alerts, comments to HUD and other federal agencies, and the latest information about CLPHA's multi-pronged housing advocacy.

On November 29, CLPHA attended a meeting at HUD headquarters with other industry groups to discuss changes to the inspection process. Recent news coverage has highlighted instances in which inspection scores do not accurately reflect living conditions and overall declines in the number of inspections for properties.

At the meeting, an official from HUD’s office of public affairs noted that the department has received an increased number of media and FOIA requests related to inspections in the last few years. HUD officials also acknowledged that the current inspection standards are 20 years old and an update and review of those standards is needed in order to maintain safe environments for residents and to ensure that scores accurately reflect housing conditions.

In addition to flaws in the scoring system, the group discussed other factors that may be contributing to inaccurate scores, such as lack of capacity at HUD field offices to monitor inspections and inadequate inspector training. Senior HUD PIH officials discussed some potential changes to the scoring system and protocol, as well as measures to increase enforcement including shorter inspection notification periods and requiring inspections of properties currently undergoing rehabilitation.

CLPHA remains concerned about the current inspection protocol’s ability to distinguish between safe and unsafe properties, and HUD’s lack of oversight for owners whose properties receive failing scores. HUD should also acknowledge that reduced capital and operating funds for public housing have greatly affected the ability of PHAs to maintain safe living conditions for their residents and that a comprehensive approach is needed through inspection protocol changes, stricter enforcement, and adequate funding for maintenance and repairs.

HUD officials reported that they will continue to explore possible changes and are considering holding listening sessions with PHAs and property owners in the spring, with a potential demonstration project for a new inspection protocol beginning in summer 2019.

In other news, HUD officials also reported at the meeting that a notice on the Annual Contributions Contract (ACC) is expected shortly. CLPHA strongly advocated for reconsideration of HUD’s earlier changes to the ACC.

On November 19, CLPHA hosted a member call to receive feedback regarding comments on the Department of Homeland Security’s proposed rule, “Inadmissibility on Public Charge Grounds.” “Public Charge” is a term used by U.S. immigration officials to refer to an individual who is “primarily dependent on the government for subsistence.” An immigrant who is found to be “likely . . . to become a public charge” may be denied admission to the U.S. or lawful permanent resident status.

The current public charge definition only considers cash assistance and long-term institutionalized care, while the new rule proposes expanding the list of benefits considered under this definition to include, among others, public housing, Housing Choice Vouchers, and Project-Based Rental Assistance. During the call, CLPHA members expressed concern about the proposal’s lack of clarity, the potential for additional burdens required of PHAs, and the overall chilling effect that the rule could have among residents and their families, as well as their decision to maintain housing assistance.

CLPHA will be submitting comments to the proposed rule, which are due on December 10, 2018. 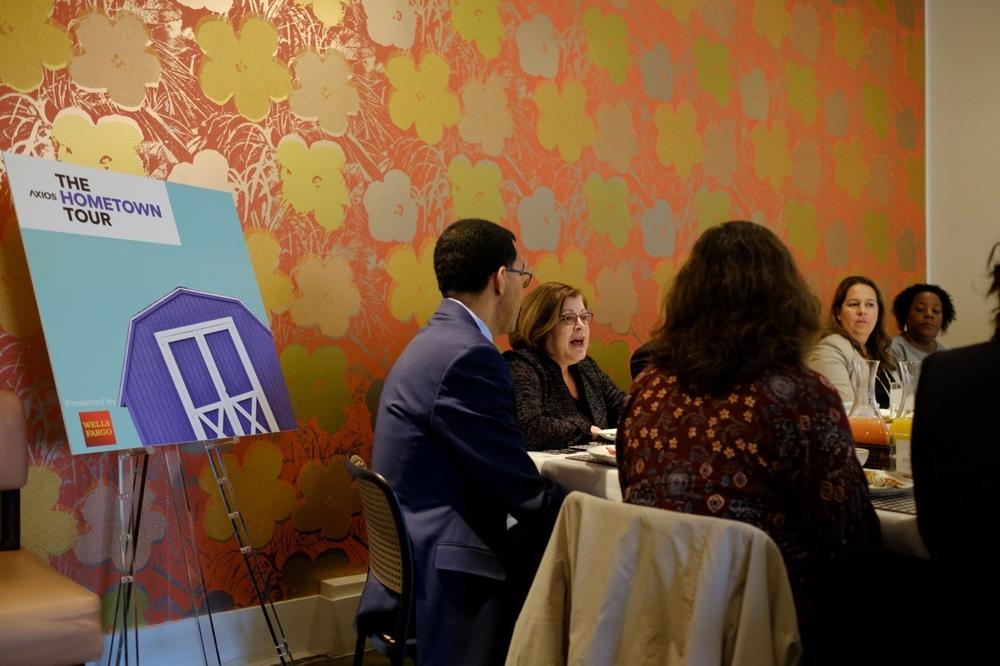 CLPHA Executive Director Sunia Zaterman emphasized the central role of affordable housing to community development and discussed the importance of cross-sector collaborations to improve life outcomes during the Axios Hometown Tour breakfast in Washington, D.C., earlier this month. Zaterman participated in the invitation-only roundtable discussion with 24 local leaders from D.C.'s top foundations, non-profits, and think tanks who shared thoughts and ideas on how to solve some of the city's biggest challenges. The event, which was co-moderated by Axios Editor-in-Chief Nick Johnston and Managing Editor Kim Hart, was recapped in Axios with a quote from Zaterman:
"One promising practice we have found is cross-sector data sharing as a starting point for building partnerships, problem solving, and identifying shared goals." D.C.'s problems are interconnected and data sharing can help build a coalition for smarter, more efficient problem solving.
Additional Axios coverage of the roundtable focused on the impact that Amazon's new D.C.-area headquarters could have on the already expensive housing market in the region. Regarding the best approach to the affordability crisis, Zaterman said, "If it's not a community-wide and business responsibility, then it's no one's responsibility."
Archived CLPHA Congressional Testimony & Comments
DHA CEO Testifies on Behalf of CLPHA Before House Appropriations THUD Subcommittee