On December 20, 2017, the U.S. Congress passed the joint House-Senate conference committee agreement on HR 1, the Tax Cuts and Jobs Act. HR 1 is the most far-reaching tax reform legislation in over three decades. For affordable housing providers the bill fully preserves private activity bonds; preserves the low-income housing tax credit; and exempts the housing credit from the base erosion and anti-abuse tax at 80%.

CLPHA and other housing stakeholders are pleased we were able to successfully preserve and protect private activity bonds—including multifamily housing bonds, historic preservation tax credits, new markets tax credits, and low-income housing tax credits in the final tax bill. However, the agreement did not make adjustments to the housing tax credit that would offset the impact of the lowered corporate tax rate from 35% to 21%. Failure to make this adjustment will reduce the value of housing credits to corporate investors.

An adjustment that was included is the 80% exemption for the low-income housing tax credit from the base erosion and anti-abuse tax (BEAT). Without the exemption from the BEAT, many investors—particularly foreign-owned banks—that account for 10% to 25% of capital invested in the housing credit would be less inclined to invest in the housing tax credit. BEAT is aimed at companies that move money offshore to lower their tax liability in the United States by imposing a minimum tax on foreign transactions, reducing the need for companies to buy tax credits.

A new bill from House Ways and Means Committee Chairman Kevin Brady (R-TX) that includes an array of tax provisions could put Housing Credit legislation back in play during the lame duck session of Congress. The “Retirement, Savings, and Other Tax Relief Act of 2018,” would renew some expired tax provisions, make technical corrections to the recent tax cut legislation, provide incentives for retirement savings, provide tax relief for disaster victims and make improvements to the IRS.

According to the ACTION Campaign, where CLPHA is a Steering Committee member, this is important because, "IRS officials have recently communicated with some bond counsel that the Housing Credit’s general public use rules do not pertain to the Bond program, thus causing problems for 4 percent Credit deals that provide preferences for veterans."

Since Republicans want to move the package before the lame duck session expires, the package is expected to bypass the committee process, and it is likely to receive a vote on the House floor later this week.

But, the Republican proposal is widely seen as an opening bid with room for negotiation from House Democrats to insert their own provisions, such as the Housing Credit, in order to get the bill over the finish line. Still, some Democratic Senators have already indicated they would prefer to wait until the start of the new 116th Congress before considering any changes to tax legislation.

As negotiations continue, CLPHA will work closely with ACTION, congressional champions, our members and others to advance the housing tax credit agenda.

The proposed elimination of the tax exemption for private activity bonds (PABs) in the House tax reform bill, along with elimination of the Historic Tax Credit and the New Markets Tax Credit, will be devastating to the production and preservation of affordable housing (see CLPHA Report 11/13/17). Housing bonds are responsible for approximately half of Low Income Housing Tax Credit (housing credit) production annually. Together, the housing credit and housing bonds finance approximately 50,000 affordable housing units each year.

While Congress is home for recess, it is critical that Members hear from you about the impacts PAB elimination will have on affordable housing.

We urge you to reach out to your Congressional representatives with the following messages:

CLPHA and stakeholders such as the ACTION Campaign (CLPHA sits on the Steering Committee) have continued to educate and press Congress to preserve these important housing production instruments. CLPHA has sent letters to the Senate Finance Committee and the House Ways and Means Committee, the respective tax-writing committees in Congress, whose chairmen and ranking members will probably serve as floor managers for their respective bills and conference committee leaders for any eventual, final legislation.

Additionally, we encourage you to engage with your local media and news outlets to spread the message that the tax reform bill negatively impacts affordable housing. The Seattle Times recently published an op-ed from CLPHA Board Members Stephen Norman (King County Housing Authority) and Andrew Lofton (Seattle Housing Authority) about the elimination of private activity bonds. You can read the full op-ed here. 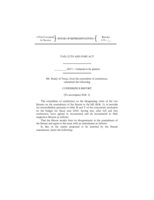