The Cambridge Housing Authority (CHA) welcomed with Congresswoman Katherine Clark (D-MA) yesterday to Corcoran Park Apartments, a deeply affordable housing development in the Congresswoman’s District, to announce legislation she is introducing that would help public housing authorities such as CHA and other affordable housing providers to continue moving forward in efforts to protect and preserve federally-assisted housing. CLPHA worked with Congresswoman Clark and her staff in helping draft the legislation.

CLPHA endorsed the ‘Support Allowing Volume Exception’ (SAVE) for Federally-Assisted Housing Private Activity Bonds Act, which would create a pathway to preserving housing without taking anything away from other initiatives with similar goals. By creating an exemption for public and federally-assisted affordable housing to the volume caps that limit the number of affordable projects that can proceed each year, the bill opens the door for rehabilitation and preservation of critical projects that are in the pipeline for Low-Income Housing Tax Credits to immediately begin the work needed to “SAVE” these assets. 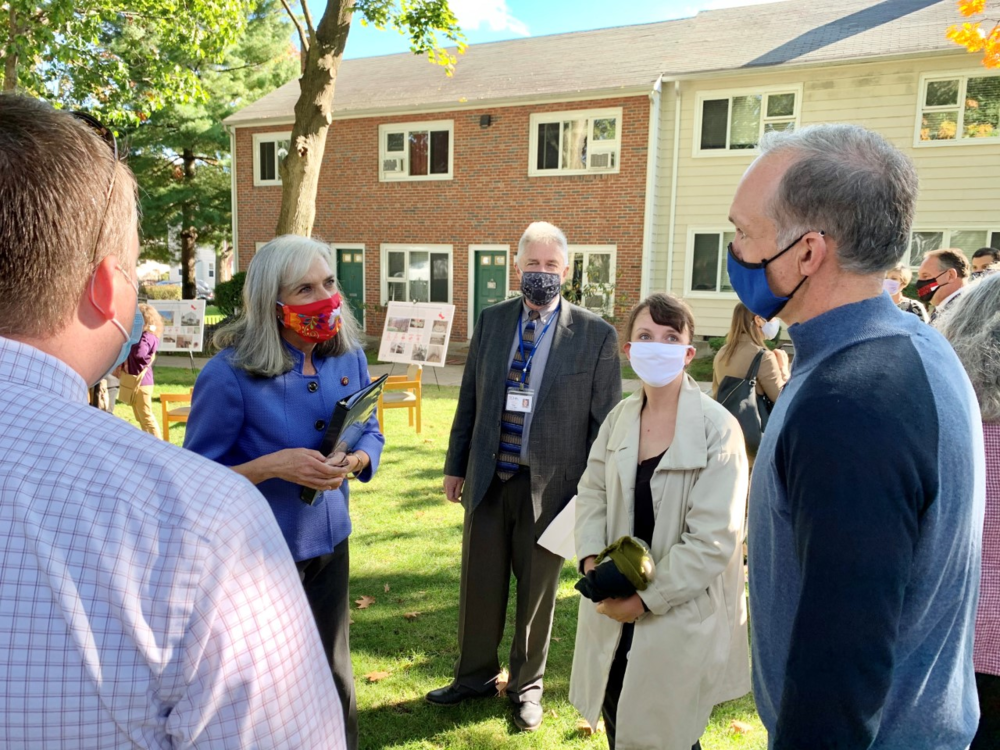 Rep. Clark (in red mask) at CHA event announcing the SAVE Act

“Private activity bonds and the resultant low-income housing tax credits have been the most significant, and only tool, that the Cambridge Housing Authority and any housing authority in the country has to obtain the financial resources needed to complete the renovations for preserving existing federally-assisted affordable housing.” said CHA Executive Director Michael J. Johnston.

“Over the past ten years, the CHA has used approximately $430 million in private activity bonds to fund $586 million in construction improving over 2,000 units - generating nearly $1 Billion in economic benefits. Despite these enormous accomplishments, the CHA is only halfway through its reinvestment in affordable housing in Cambridge. Congresswoman Clark’s proposed legislation creates a pathway to preserving the housing which absent the legislation would require CHA to wait 10 or 15 years for access to the amount of private bonds it could use and needs today to protect and preserve nearly 1,000 additional affordable housing units,” Johnston added, while also acknowledging that the proposed legislation would benefit other Massachusetts Housing Authorities such as Boston, Worcester, Brockton, Medford, and Watertown, among others.

The Cambridge Housing Authority and CLPHA look forward to working closely with Congresswoman Clark on the passage of this important and much-needed legislation.