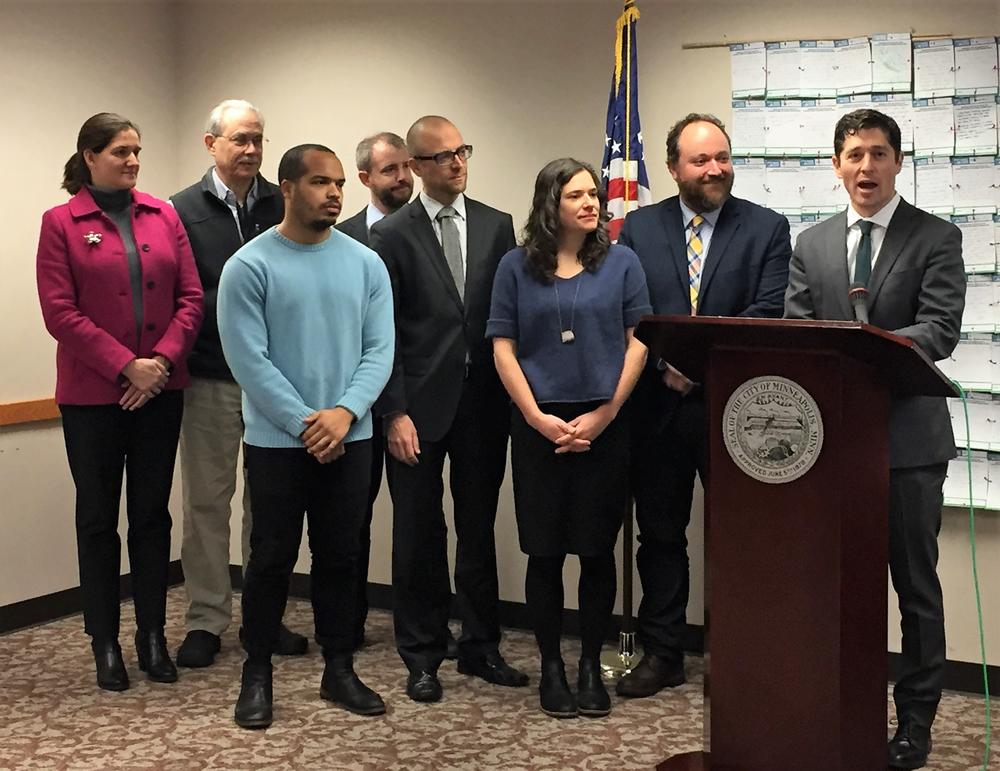 Minneapolis Public Housing Authority Executive Director and CLPHA Board Member Greg Russ (second from left) joins Mayor Jacob Frey (far right) for the signing of Minneapolis’s budget.
In a major week for affordable housing in Minneapolis, the Minneapolis City Council passed a budget on December 5 that includes its highest-ever allocation for affordable housing, $40 million, which is more than triple the city’s last record.
“Thanks to our city’s collective commitment to addressing our housing crisis and this record-setting level of support, our city is poised to lead the nation in affordable housing work," Minneapolis Mayor Jacob Frey said in a statement.Minneapolis Public Housing Authority (MPHA) Executive Director and CLPHA Board Member Greg Russ joined Mayor Frey for the budget’s signing (pictured).
Minneapolis’s $40 million affordable housing budget includes $3.3 million in funding next year for “Stable Homes, Stable Schools,” a partnership between MPHA, the city, and Minneapolis’s school district to provide vouchers to families of students experiencing homelessness.
Following the successful passage of this massive investment in affordable housing, the Minneapolis City Council, with support from Mayor Frey, unanimously passed a resolution affirming “investments in public housing and the people who live there.”
According to an MPHA news release welcoming its passage, the resolution affirms the critical role public housing plays in the city’s housing landscape and notes the challenges created by decades of federal underfunding.
“This resolution makes a powerful statement, and it comes at a critical time,” says Russ. “Public housing provides homes for more than 10,000 of the lowest-income people in the city. Their well-being matters to the whole community, but we’re in real danger of losing these homes over time if we don’t all pull together. This resolution recognizes that we are in this as a team.”
The protections embodied in the resolution include the right to return to any remodeled or redeveloped property, the right to receive written relocation plans, and the right not to experience rent increases because of redevelopment or improvements. Any preservation and development strategies will also include meaningful resident and community consultation.
The resolution also supports MPHA’s efforts to “stabilize and increase its funding sources” through federal programs such as the Rental Assistance Demonstration (RAD) and Section 18. “If we go with conversion, that gives us more stability and access to funds,” says Mary McGovern, MPHA resident and President of the Minneapolis Highrise Representative Council (MHRC). “We already don’t have enough affordable housing for people who need it in this city. These buildings that we do have—we absolutely have to preserve so they are here for another 50 years.”
Related Organization(s):
Minneapolis Public Housing Authority
CLPHA Program(s):
RAD
Topic(s):
Community Development
Resource type(s):
Members Making News